First day of what is going to be a training camp with some great mates and a few new faces started yesterday.

The camp started a few years ago with myself, Gary (Fegan), Adam(Crab) and Chris (Meenan), a mix of pirate triathletes who decided on some ‘extra’ training in the build up to Ironman. We started in 2007 with an Easter camp by cycling from Warrington to the Lakes on the Friday (95 miles) Fegan actually cycling 130 miles from Edinburgh as he is north of the border, then a long run and lake swim on the Saturday, the infamous Fred Whitton sportive ride on the Sunday (104 miles, 4000m ascent) and then cycling home the 95 on the Monday.

Fegan had to get a train at Carlisle as he had a slow puncture but good effort for trying.

The camp has been running since 2007 and has happened in some form or another either at Meenans in Belfast, Fegans in Edinburgh or Adams in Bournemouth.

Fast forward to this weekend and we have 11 with us. 4 from Belfast, 4 from Bournemouth, 2 from Warrington and Fegan.

Day 1 – Myself and Dan set off at 8ish from Warrington to arrive at the FP camp for the first ride at 11 ish.

This was planned as a warm up, 70 miles with around 2100m of climbing, I had actually forgotten that the main part of the ride was Wrynose and Hardknott in the first 12 miles but the other way up from the normal route the Fred Whitton takes. We found the ride here, it gives a much better image of the route and some great photos.

We arrived on time to find it raining quite heavily but the Irish lads (Meenan, David, Gerry, John) who are all cyclists were getting cabin fever after staying the night and were going out for a cheeky hour before the main ride. The Bournemouth lads (Adam, Loz, Gordon, Lee) had gone for a 3k swim at the local pool, Fegan arrived around 11am with enough kit for the whole hostel, food and clothes !!

We decided we needed to be out for 12 to be able to complete the ride before dark. Its only 70 miles but the lakes can be hilly, so the ave speed wasn’t expected to be high (which it wasn’t)
The Irish lads had come back looking like drowned rats, just as the rain stopped, so they decided to shower and wait for the rain to give up, it did, by the time I got down 2 flights of stairs to mount up, it was dry, bad timing ? or good luck on their part ?

So 8 of us set off, the first climb up Wrynose is a 25% drag, the field split and it was everyone for themselves. What a wake up after 8 miles, the descent was a bit more dramatic, Meenan set off on the 25% downhill and by the time he was at the first corner he was sideways, one foot clipped out screaming like a girl (not really but it sounds more dramatic – the girl bit anyway, he was defo sideways !!) I was behind him doing 40mph, slowing down wasn’t easy, I unclipped trying not to skid off the side of the hill, then I heard something I didn’t want to hear in the first hour of a weekends riding, Adam skidding along the floor behind me on his new Cervelo. I stopped to see him on his feet, picking up bits of the bike and checking his gears.

A few scratches as shown below

The next climb up Hardknott wasn’t as bad as I remember it but was still difficult with transit vans coming up the other way. Ave 20% with bits of 25% & 30% certainly wake up the legs early doors.

The ride settled down for a few miles until we hit Corney Fell, bear in mind we had only done 35 miles and we had been riding for nearly 2.5 hours and Fegan stomping up a steep climb snapped his chain, this was Adams bike, no issues for 1000 miles and the jinx has snapped the chain 35 miles into the first day.

This started the 40 mins of Rosey (me) trying to fix a chain for the first time ever, after working out how to use a chain tool and get the chain off, I had taken the wrong link out, then had to shorten the chain again by another link to get the right links together, great, chain put together, bollox, we had put the chain together and not put it thru the chain guide, we had to split the chain again and redo it. Sorted, short chain, 40 mins wasted, Meenan by this time had come the 2 miles down the climb to see how we were getting on, burning more leg ‘matches’ in the process.

So Fegan has a short, weak chain and we are averaging 14 mph, not the best day so far. Then the jinxster added to the carnage, at the next set of lights forgetting he had a short chain Fegan gets into big ring at the back and big ring at the front, the result ? the rear derailler gets pulled into the cassette and split the jockey wheel bolts in two.

So, with no real tools we managed to find a bolt to get him started again but that put paid to the ride for a few of them, they decided to head back at the halfway point and ended up covering 50 miles, Fegan had to walk once on one of the steeps going home but with a new chain and derailler is ready to rock this morning.

The other 5 of us set off for the rest of the ride, the miles ticked by slowly, slow up hills, great descents, no real dramas. The scenery was fantastic, the riders worked well together and we got back in around 5 hours. Job done.

Today is Fred Whitton ride, its the official ride tomorrow so we are doing it when its very quiet, long day planned, hopefully no mechanicals but with Fegan around, who knows lol !!Below are my readouts for the ride yesterday.

This is the Garmin data

This is the SRM data

Not that interesting but the HR on the SRM shows a lot of work.

Last night was finished off with a paddle in the Lake for the weary legs, a massive pasta bake by the jinxster and a cold Guinness in town.

All in bed by 10pm ready for this today Fred Whitton 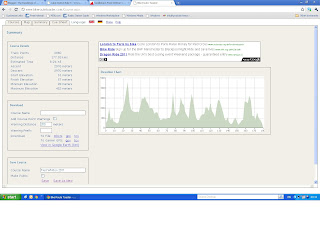 p.s. Saturday morning, 7am, Fegan has been lake swimming, Adam is an insomniac and up since 5.30am, dinner is done and prepared and only a small cut with a blunt knife, at least we won’t see it as its chilli tonight !!